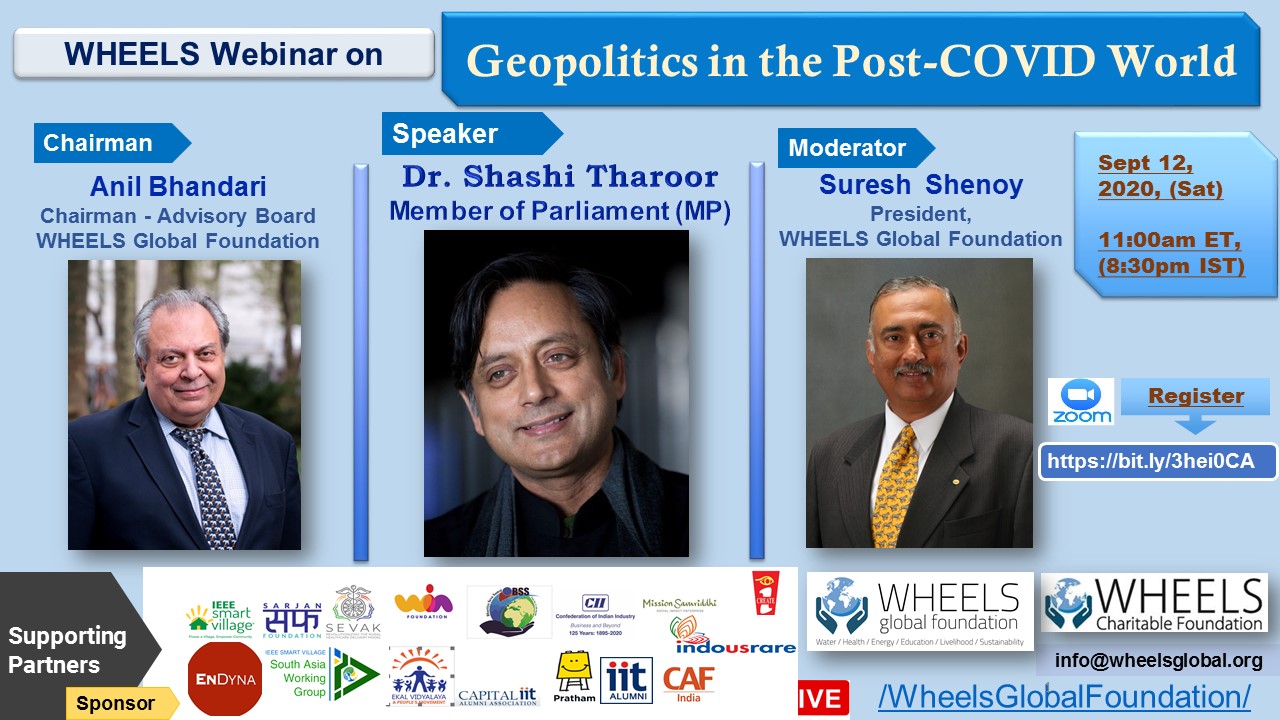 Geopolitics in the Post COVID World - A Dialog with Hon. Member of Parliament (MP)

Dr. Shashi Tharoor's vast experience at the United Nations including his service as Under Secretary, many years of experience in Global Affairs as a parliamentarian, service as Minister of State for External Affairs in the Government of India, and a commentator and author of many books offers us an opportunity to explore his views for the post-COVID world and the role for the United Nations. His new book The New World Disorder And the Indian Imperative, co-authored with Samir Saran, President of Observer Research Foundation (ORF), one of Asia's most influential think tanks, is a crucial study on the current state of chaos in international politics and identifies India's imminent role, as a non-hegemonic global power, in scripting an equitable ethic for a new international order.

Additionally, Mr. Tharoor is known for his views on a number of topics including economics, history, governance, and geopolitics due to both his well-regarded educational attainment and his broad experience while at the United Nations. He has also been actively involved in demanding reparations to India for British atrocities during the 'Raj', reforming education in India, and was invited to serve on the National Swatch Bharat program by Prime Minister Modi. Please join us for this engaging hour with a thought leader and expert on global affairs. 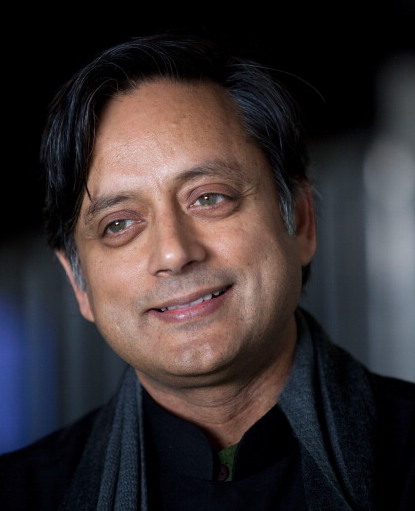 Dr. Shashi Tharoor is an author, politician, and former international civil servant, Dr. Tharoor straddles several worlds of experience. Currently a third-term Lok Sabha Member of Parliament (MP) representing the Thiruvananthapuram constituency, he has previously served as Minister of State for Human Resource Development and Minister of State for External Affairs in the Government of India. He currently chairs the Parliamentary Standing Committee on Information Technology.

During his nearly three-decade long prior career at the United Nations, he served as a peacekeeper, refugee worker, and administrator at the highest levels, serving as Under-Secretary General during Kofi Annan’s leadership of the organization. Dr. Tharoor is also an award-winning author of twenty books of both fictions as well as non-fiction, including The Great Indian Novel, The Paradoxical Prime Minister, The Hindu Way, and The New World Disorder. He has won numerous literary awards, including a Commonwealth Writers’ Prize, the prestigious Crossword Lifetime Achievement Award, and the Sahitya Akademi Award in the category of ‘English Non-Fiction’ for his book An Era of Darkness.

Born in London in 1956, Dr Tharoor was educated in India and the United States, completing a PhD in 1978 at the Fletcher School of Law and Diplomacy at the Tufts University. While there, he received the Robert B. Stewart Prize for Best Student and also helped found and served as the first Editor of the Fletcher Forum of International Affairs, a journal now in its 40th year. Dr Tharoor was also awarded an honorary D.Litt by the University of Puget Sound and a Doctorate Honoris Causa in History by the University of Bucharest. In 1998 the World Economic Forum in Davos named him a “Global Leader of Tomorrow”. He is also a recipient of several awards that include a Commonwealth Writers’ Prize and the Pravasi Bharatiya Samman, India’s highest honour for overseas nationals. In 2012 the King of Spain awarded him the Encomienda de la Real Order Espanola de Carlos III. Among numerous other awards are one for "New Age Politician of the Year" from NDTV, the Hakim Khan Sur Award for National Integration, and the Priyadarshini Award for Excellence in Diplomacy.

Dr Shashi Tharoor was a pioneer in using social media as an instrument of political interaction. Till 2013 he was India’s most-followed politician on Twitter, until being overtaken that year by the current Prime Minister, Narendra Modi. He was the first Indian to reach 10,000 and 100,000 followers on the medium and currently has over 7.2 million followers.

Upon registration, you may send your questions in advance to [email protected]. Attendees will also be able to post their questions during the webinar. You can join the webinar 15 min early (i.e. 10:45 AM ET OR 8:15 PM IST) to watch slide show on WGF activities and related project's videos.

WHEELS Global Foundation(WGF), "An Initiative of IIT Alumni, USA" with the mission of Technology Enabled Philanthropy. WHEELS has also been selected by NITI Aayog, Govt. of India as a member of committee for Innovation and Technology Transfer. 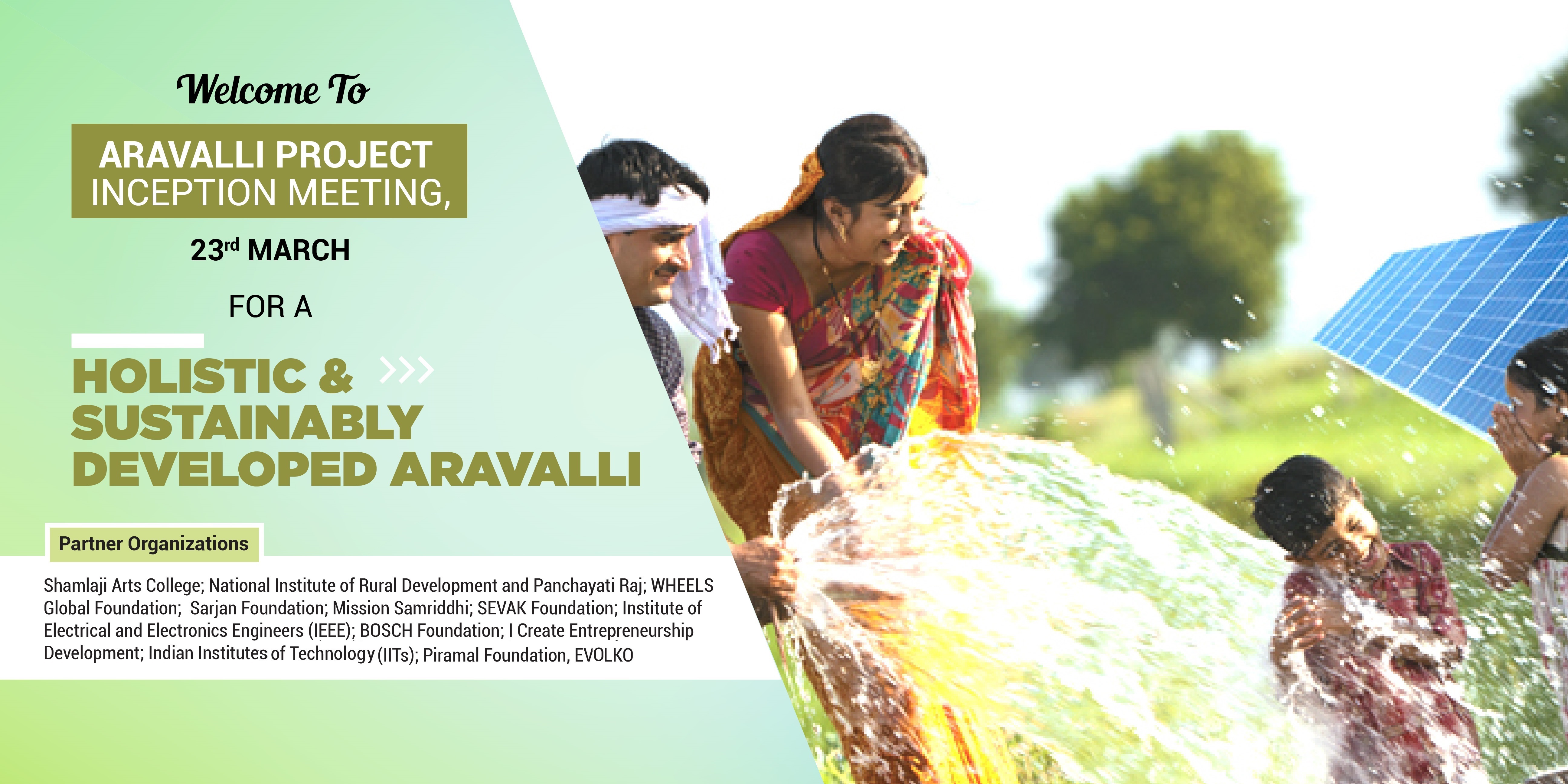 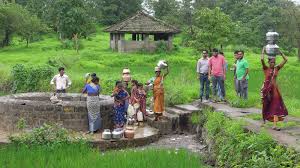