New York, NY – October 5, 2017 – Ruyintan (Ron) Mehta, a known name in the IIT alumni community, recently made a generous contribution to the WHEELS Global Foundation (WGF). After receiving his degree in Chemical Engineering from IIT Bombay for roughly 10,000 rupees, or about $152 U.S. dollars, Mr. Mehta moved to the United States to continue his graduate studies. “If a country as poor as that can do so much, I pledged that when I could, I would do my darnedest to give back to IIT and society at large,” said Mr. Mehta. And, with nearly $1 million in total contributions, Mr. Mehta has made good on his word.

Although he himself is not religious, he has always followed the Golden Rule of Zoroastrianism: “Good thoughts, good words, good deeds.” His earliest personal giving inspiration was his mother. Many middle-class families in India had servants at the time, and he watched as she treated theirs as family, even paying for him to attend middle and high school at night, at St. Xavier’s Ahmedabad, a prestigious all boys school. She also volunteered at a school entirely composed of blind girls. Occasionally, she would bring a group of them home over the weekends, where he marveled at her capacity to give back.

Like Mr. Mehta, the mission of WHEELS Global Foundation is to give back to India, the USA and to global rural communities. With a vision to use “technology to enable philanthropy,” WGF is a non-profit organization that is a pioneer in applying technology to provide solutions to issues related to their six tracks: water, health, education, energy, livelihood and sustainability. WGF was founded by the alumni of the Indian Institutes of Technology (IIT); one of the premier engineering and technical schools in the world. 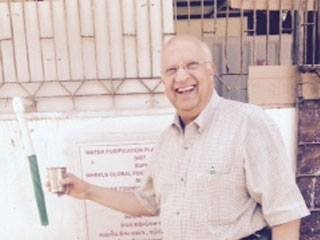 In his role as a Board Member for WGF, Mr. Mehta along with Co-Director Madhu Reddy oversee the ‘water’ track. The primary goal of which is to provide rural villages in India with a source of clean drinking water. Much of India’s rural water source lacks sanitation and has unhealthy levels of fluoride, iron, arsenic and other toxic components. WGF provides funds to develop Clean Drinking Water Plants (CDWP) in remote villages. To date, WGF has installed ten plants in three states in India, with three others in development. In total, the foundation has served approximately 75,000 people with each plant serving between 6,000 to 8,000 people per village. WGF plans to install thirty additional plants, commissioned in various Sevak villages that currently do not have water treatment plants. The Sevak Program is a state-wide pilot in Gujarat with 35 Sevak villages, one in each district in Gujarat.

In addition to his support of WGF, Mr. Mehta says, “I am a firm believer in sustainability within the area of scholarships, so I’ve been donating to an organization called Foundation for Excellence. It’s a foundation that provides scholarships to needy students at IIT Bombay.” He also serves as a certified mentor for the Central Jersey SCORE chapter, where he provides counseling and mentoring to entrepreneurs and small businesses. He was instrumental in developing a student exchange program between his alma mater IIT Bombay and The Cooper Union, a prestigious engineering school in New York City. “There is remarkable success in young students learning a culture that is different than theirs. So, to provide a jump start to the partnership, I provide a $2,000 USD travel grant to each student in the exchange program.” He also serves as the current President of IIT Bombay Heritage Foundation and is former President of IIT Bombay Alumni Association of New York. He financially contributes to and sits on the Advisory Board of the Dakshana Foundation, which prepares the most economically needy youth in India to take the IIT joint entrance exam (JEE). Today, Mr. Mehta keeps a deep admiration for the country he has called home for 47 years, residing in New Jersey with his wife, two children and three grandchildren.

His donation comes in advance of the WGF annual benefit gala, to be held on Friday, November 3 at The Pierre, A Taj Hotel in Manhattan, NY. Although Mr. Mehta has been giving back to the community since the early 1990’s, his story is largely untold. This year, WGF will focus on highlighting the giving stories of some of our community’s unsung heroes. Additionally, the gala will honor Mr. Josh Weston, the former CEO of ADP, for his years of service as a community leader. He co-founded Safe Water Network, a non-profit that provides access to clean drinking water to thousands of people in India and Ghana. The funds raised will go towards launching additional Clean Drinking Water Plants (CDWP), provide quality education, health care and sustainable livelihoods for rural communities in India.

ABOUT WGF: WHEELS Global Foundation (WGF) is a non-profit organization that is a pioneer in applying technology to provide solutions to issues related with water, health, education, energy, livelihood, and sustainability. Founded as an independent 501c3, the organization partners with other national and international NGO’s and non-profit organizations, working in collaboration to aid a larger rural population globally. For more information, visit:  www.WHEELSGlobalFoundation.org